The Demographic Impact of the Housing Crisis

The Demographic Impact of the Housing Crisis

by Robert Dietz —  Eye on Housing

The economic impacts of the ongoing housing crisis include lost jobs, economic growth and household wealth. There are also demographic consequences that result from a weakened housing sector. For example, NAHB estimates that more than 2 million household formations have been delayed due to challenging economic conditions.

Delayed household formations mean that younger families are delaying marriage and having children. This latter effect is clearly seen in theCenter for Disease Control National Center for Health Statistics data on U.S births. 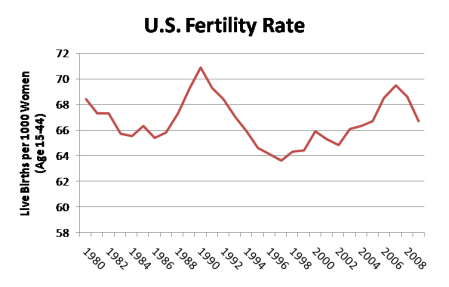 The chart above tracks the U.S. fertility or birth rate per 1,000 women of childbearing age (defined by the CDC as ages 15 to 44). In the 1990s, the data indicate a significant decline in the fertility rate due to a policy focus on reducing teenage pregnancy, which was fairly successful.

Given that this age group includes many first-time homebuyers (the median age of a first-time homebuyer in the U.S. is 31) , it seems likely that the housing crisis is a factor. The following map presents the percentage change in fertility rates over the 2007 to 2009 period by state.

A simple scatter plot and statistical test confirm the idea that the decline in housing has affected the number of U.S. births.

The chart plots the change in fertility rates over the 2007 to 2009 period against a proxy for the depth of the state-level housing crisis: the percentage decline in permits as measured as the minimum level of permits relative to the normal level of home building activity (the average number of permits from 2000 to 2003). The linear trend indicates that states with more serious housing crises also experienced larger declines in fertility rates. A statistical test of this relationship confirms that the relationship is statistically significant.

This analysis confirms that the ongoing crisis in housing, in the form of delayed household formations, is not only having short-term economic costs in terms of lost jobs and economic growth but will also have long-term demographic impact as measured by the number of children born to those in their 20′s and 30′s. Besides having an impact on the makeup of the country, including the composition of the middle-class, these declining birth rates will also place additional fiscal pressures on the nation’s already challenged long-term entitlement programs (Social Security and Medicare) that require taxing today’s workers to pay current expenses.