by Robert Dietz — Eye on Housing

According to FDIC Statistics of Banking for the third quarter of 2011, lending for acquisition, development and construction (AD&C) purposes continues to decline. However, the rate of decline is slowing, perhaps indicating that most troubled loans are now off bank balance sheets. 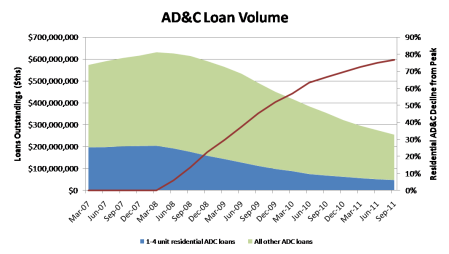 From early 2008 through the second quarter of 2011, the total stock of home building AD&C loans held by FDIC-insured institutions had declined by at least 9% every quarter. The largest quarterly decline was recorded in the second quarter of 2010, when the outstanding stock of AD&C loans contracted 15%. But the decline has slowed over the last year, with no rates of reduction in excess of 10% since 2010, and the smallest post-2009 quarterly decline (6.7%) being reported for the third quarter of 2011.

In spite of this slowing, lending conditions remain tight. While AD&C lending is down 77% since the first quarter of 2008, single-family permits are down only 41% over the same period, a considerable difference between permitting and construction loan availability.

All other construction and development loans, including commercial and 5+ unit residential properties, are down 53% since the peak in the third quarter of 2008. This decline, while large, is still smaller than the decline for residential AD&C loans.