Traditional Reasons for Remodeling are Still the Main Market Drivers

Traditional Reasons for Remodeling are Still the Main Market Drivers

by Paul Emrath — Eye on Housing

According to the remodelers who answered special questions on NAHB’s Remodeling Market Index (RMI) survey for the 1st quarter of 2012, the traditional “need to repair/replace old components” and “desire for better/newer amenities” are still why most customers choose to remodel their homes.  On a scale of 1 to 5 (where 1 indicates never or almost never, and 5 is very often), these were the only reasons to remodel that scored an average of above 4.0.

In contrast, some of the trendier reasons to remodel—like energy efficiency or aging in place—scored below 3.0.  Getting a property ready for a distressed sale scored a particularly low 1.35.

The survey also asked remodelers if particular reasons to remodel had increased or decreased in frequency over the past two years.  The most common reasons to remodel tended to be on the rise, and the least common on the decline.  For instance, “need to repair/replace old components” and “desire for better/newer amenities” appear at the top of the second chart as well, as the only reasons to remodel that over half remodelers said were increasing in frequency (either somewhat or significantly).  Similarly, preparing for a sale (distressed or otherwise) appears at the bottom of both charts. 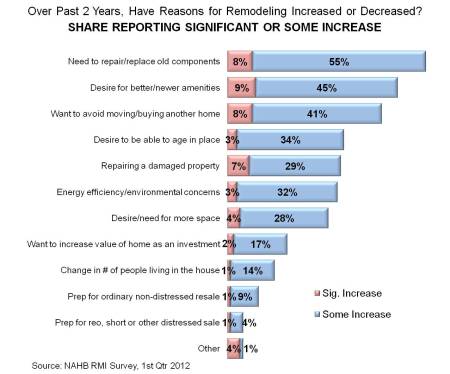 On balance, most reasons to remodel seem to be on the rise, at least slightly.  Other than preparing for a sale, the only exception is remodeling to increase the value of the home as an investment.  Twenty-five percent of remodelers said that increasing the value of the home was becoming a less common motivation among their customers, compared to 19 percent who said it was becoming more common.

The relatively low incidence of remodeling to increase the home’s investment value or prepare it for  sale—along with the high rate of remodeling in heavily used areas like bathrooms (as reported in the May 8 blog)—reinforces the notion that owners are interested in enhancing the spaces in their homes more for themselves than for future owners.

The survey results described above are available in more detail (including a breakdown of each question by Census region) online athttp://www.nahb.org/fileUpload_details.aspx?contentID=180910