by David Crowe — Eye on Housing

The NAHB/Wells Fargo Housing Market Index for October increased one point to 41, the sixth consecutive month for an increase.  Two of the three components to the index remained the same, current and expected sales, while the traffic index rose five points to 35, the highest in over six years.  The index, however, remains below the tipping point of 50 where an equal number of builders see better conditions as see poorer conditions. 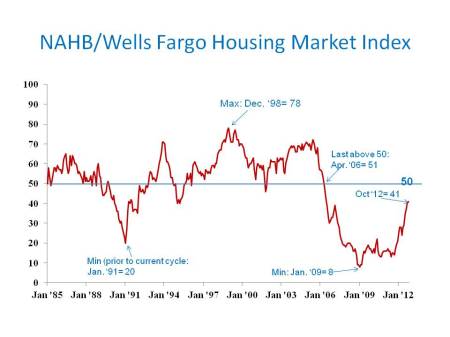 Comments of concern continue around tight credit conditions for borrowers and builders as well as appraisals below the contracted price.  Some markets are also beginning to feel the pitch from little or no development taking place for five or six years.  The inventory of buildable lots is declining rapidly and the supply of new lots is still some years off as the development and approvals must start up again while credit remains tight for this kind of activity.  As lot prices increase, builders are being squeezed by higher input costs, including some building materials, but only slight increases in housing prices.

The slowdown in builder sentiment is appropriate given the uncertain future of tax and government spending policy.  Until elementary federal spending policies are settled, buyers and builders are appropriately cautious and a full housing recovery will have to wait for more clarity on these issues.

by David Crowe — Eye on Housing

The NAHB/Wells Fargo Housing Market Index (HMI) rose another three points to a level of 40 in September, the highest in more than six years and extending to five the number of consecutive months of increase.  All three components also increased to levels last seen five or six years ago. The component measuring expectations for the next six months broke the 50-threshold landing at 51.  The HMI and components are diffusion indexes ranging from zero to 100 where 50 represents an equal number of builders who see better as who see poorer conditions.

The three-month moving average indexes for all four Census regions also increased from two to five points to 30 for the Northeast, 40 for the Midwest, 36 for the South and 43 for the West.  For the Midwest, the September level is the highest since November 2005.  The South and West were last above their current levels in May 2007 and September 2006 respectively.  The Northeast saw a one-point higher peak in July 2012.

The steady rise from a recent low of 14 in September is a strong signal that builders continue to see more serious customers in their models and offices.  The increases in builder confidence in the face of more modest housing permit and starts data does foretell continued production increases if the relationship that has existed for over 25 years continues.  Builders continue to express concern about inadequate access to credit for their customers.  Tight credit standards for buyers and inaccurate appraisals have knocked out potential sales.

Additional emerging hurdles that may be causing the optimism and production to diverge include a shortage of lots because the development pipeline has been shut down for so long and rising costs of some building materials.  In a few healing markets, good building lots ready for construction are becoming rare but developers are not bringing new ground to the market because of their lack of access to credit.  Building materials including wood panels, dimension lumber and drywall have seen significant increases recently as suppliers hold back on opening new production facilities until future housing production trends are more certain.