The Census Bureau reports New Home Sales in September were at a seasonally adjusted annual rate (SAAR) of 389 thousand. This was up from a revised 368 thousand SAAR in August (revised down from 373 thousand). This is the highest level since April 2010 (tax credit related bounce).

The first graph shows New Home Sales vs. recessions since 1963. The dashed line is the current sales rate.

Click on graph for larger image in graph gallery.

The months of supply declined in September to 4.5 months. August was revised up to 4.6 months.

This is now in the normal range (less than 6 months supply is normal).

The seasonally adjusted estimate of new houses for sale at the end of September was 145,000. This represents a supply of 4.5 months at the current sales rate.

On inventory, according to the Census Bureau:

“A house is considered for sale when a permit to build has been issued in permit-issuing places or work has begun on the footings or foundation in nonpermit areas and a sales contract has not been signed nor a deposit accepted.”

Starting in 1973 the Census Bureau broke this down into three categories: Not Started, Under Construction, and Completed.

This graph shows the three categories of inventory starting in 1973.

Even though sales are still very low, new home sales have clearly bottomed. New home sales have averaged 364 thousand SAAR over the first 9 months of 2012, after averaging under 300 thousand for the previous 18 months.  Sales are finally above the lows for previous recessions too.

This was slightly above expectations of 385,000, and was another fairly solid report. This indicates an ongoing recovery in residential investment.
New Home Sales graphs

by Robert Dietz — Eye on Housing

Despite some recent ups and downs, the share of single-family homes built for rental purposes remains higher than historical norms.

According to data from the Census Bureau’s Quarterly Starts and Completions by Purpose and Design, the market share of single-family homes built for rental purposes, as measured on a one-year moving average, stands at 4.3% for the 2nd quarter of 2012. This is lower than the recent peak of 5.35% set at the beginning of 2011, but considerably higher than the 20-year average of 2.69%.

In general, with the onset of the Great Recession, the share of such homes rose, with a dip during the homebuyer tax credit period.

Despite the elevated market share, the total number of single-family starts built for rental purposes remains fairly low – only 21,000 homes started over the past year. 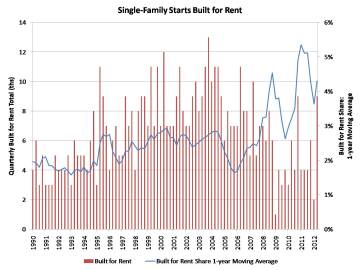